The Truth of Me. 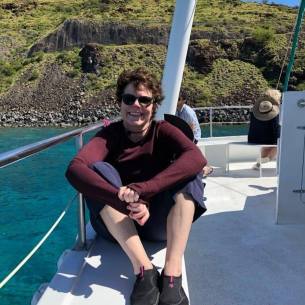 Many years ago I was running on a treadmill in a gym in Los Angeles. Suddenly the noise of the gym was silenced and I was hovering over the machine, watching myself run. I floated towards the ceiling and as I got more air I heard an overwhelming cacophony of voices and languages, yelling, talking, laughing, crying, as if I had intercepted some huge conference call that everyone in the world was involved in. It was overwhelming and loud and I remember clapping my hands over my ears. I continued to rise and float.

The voices settled into something familiar, some universal language that I could understand quite perfectly for some reason. The image of the gym had fell away and was replaced with a ring of human like shapes that were glowing pink and green, and they were holding hands in a circle. There were thousands and thousands of these creatures, and I understood the way you understand things is a dream that they were spirit. Our spirit, Us. I didn’t understand the language I was hearing outright, but I did on a deeper level.  I also knew that once upon a time it had been my language. I was thinking wildly, I get it! I get it, this is IT! This is where we come from, this is what we are.

As soon as I understood that, I found myself back on the treadmill, wild eyed and breathless. Nothing had changed from a few minutes ago, same runners to the right and left of me. I pressed the emergency stop on the treadmill and noticed John Goodman working out on the gym floor. It was LA after all.

So what the hell was that? Was I dreaming? Nope. Was it a runner’s high? Maybe. But I don’t think so. I think I was privvy to one of those things that people see or experience that are a peek into another reality. But I do think it was US, beyond the noise of our world, our planet, distilled down into something pure.

The reason I am sharing this event is because I am acutely uncomfortable right now. I’ll just say the “S” word, I am Scared. Scared of chemo, scared of being seen as a “Sick girl”. Scared of how this disease will progress. So scared for my kids.

The truth of me today is that I have cancer. Even with that,  I’m not sure that I will ever be seen as a “sick girl” except that by those who see a bald head and who don’t know me.  The truth of ME is that I will continue to move forward and listen to the wisdom of that circle of spirit. Everything is fleeting; storms, sunshine, a love affair, the life of a planet, the life of an elk in the forest, it’s all moving and coming and going and I am proud to be part of that cycle and that hub bub of life. Eventually I will go as well, we all will, and it will be what is supposed to be.

Today is my little blog’s third birthday, three years round the sun. Now that I am stepping into treatment again I made a promise to myself to get back into a regular schedule, although I don’t want my blog to be about Cancer. Like the Prime Minister of New Zealand said, let’s not mention the name of the terrorist.

In the blog I share what I am going through in hopes that it resonates and helps someone else find a little peace in the Fear and Loathing that can be so easy for us highly imperfect creatures to fall into.

Because we may be weepy with worry much of the time, but sometimes we are beautiful creatures that all speak the same language and hold hands in the ether, and I’ve seen that.