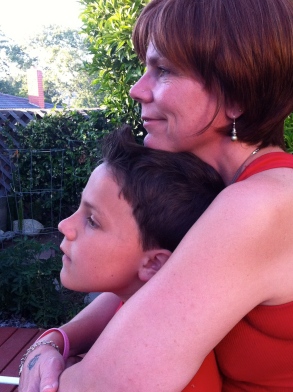 “When I was a boy and I would see scary things in the news, my mother would say to me, “Look for the helpers. You will always find people who are helping.” – Fred Rogers

My kids and I have been watching the news like hawks.  My twenty-year old, Sam, knows the names of all the current players, who did what and when.  I was about half his age when Watergate began, but we didn’t have the internet, and we didn’t have the many news companies, and there was no social media.  My family had one television that got one station that only came in sometimes, and that called for a family member to go outside and “adjust” the antenna.  There was some distance, some breathing room from what was happening in Washington and what was happening on our television.  Often the picture was obscured by the arms, legs and tail of the heatseeking Siamese that would drape herself over the warmth of the box, further distancing me from Tricky Dick. I didn’t “get” Watergate in the way that my son experiences current events today.  The world has become very small, very sudden, in a world of hurt, and with an unsure future.

On the night of the Northridge earthquake, I had just brought Gilda, my baby daughter, into the bed to nurse.  We snuggled in and suddenly heard what sounded like a locomotive driving through our house. It was deafening and everything was shaking.  Her father, Gilda and I were all pinned to the bed by the centrifugal force of the quake.  It was terrifying, and I was so frightened that Gilda would be ripped from my arms.  As soon as I was able, I ran into my daughters room, where a wall had become dislodged.  Her crib was full of the books that had been on a shelf on the fallen wall.  She could have been killed, or at the very least, badly hurt.  The aftershocks continued for days, shaking the house and making us seasick with the constant movement. Our nerves were shot.  Too afraid to go inside, we camped in our back yard until everything settled down.

The point of that story is that feeling the very earth under your feet tremble and shake and become something other than it has been your whole life is terrifying in a way that few things are. Now our children, and their children are hearing the worst, doubting the future and sustainability of the planet.  Over and over.  Through no fault of their own, and seemingly beyond their control, the end could be in site.  We may end up in terrariums like in the sci-fi movies. Bubbles with controlled environments.  Eggs and sperm of our devastated sea life and animal species in cold storage, the oceans and air outside poisonous and scathing, waiting to shrivel our airways and pop our eyeballs like Arnold Schwarzenegger in Total Recall. Or not. But what does seem real is that we have gone too far, with the current situation. We appear to be determined to drive the bus of the cliff, pedal to the metal.  For money, for power, and lusty ignorance.

But, as Mr. Rogers’ mother said, there is something else afoot.  The Helpers.  The ones that care, the thinkers. Thinkers with a capital “T”. We are here, and we are being forced into action.  That’s not a small thing. Our children see that also. Instead of hating, of “flinging poo”, we make ourselves The Saviors. The Savers. So many of us are waiting for an intervention, someone to save the day, but it’s us.

We have to work very hard. The hardest may be to avoid the bigger picture by tangling it up in the mud, on the internet, on Facebook.  That helps nothing, and I am guilty of it as well. No more.

Today I am a Thinker and a Helper. I promise to show my kids there is incredible power in community and people. We can be good, and we can do good. I just have to believe that is true. Let’s Save the World.